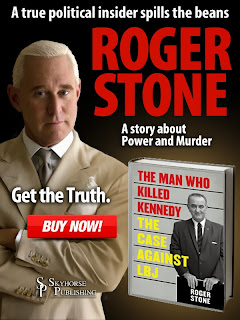 Roger Stone is a political consultant whose compelling firsthand knowledge shows that Lyndon Baines Johnson was not just involved in JFK’s assassination, but was in fact, the mastermind. In Stone's new book, The Man Who Killed Kennedy: The Case Against LBJ, LBJ is shown to have a motive, means, and opportunity to murder President John F. Kennedy.

Stone fills in the speculation and gaps from other assassination reports such as Robert Caro's four-volume biography on LBJ, and Bill O’Reilly’s research on JFK’s assassination.

The Man Who Killed Kennedy is an insider’s story, with Stone shedding new light on murder, deception, cover-up, and intrigue surrounding Richard Nixon, George H. W. Bush, Gerald Ford, J. Edgar Hoover, Robert Kennedy, the CIA, the mob, Texas oil interests, and the linchpin, Lyndon Baines Johnson. “When I pressed him on who he thought killed Kennedy, Nixon would shiver and say, "Texas”, stated Roger Stone. Read The Man Who Killed Kennedy to find out how and why LBJ did it.

Conspiracy Queries can be found on iTunes, Stitcher, and can be heard on SiriusXM's Canada Talks Channel 167 Thursdays 12pm, Fridays at 9am, Saturdays at 2am & 8am, and Sundays 11pm EST